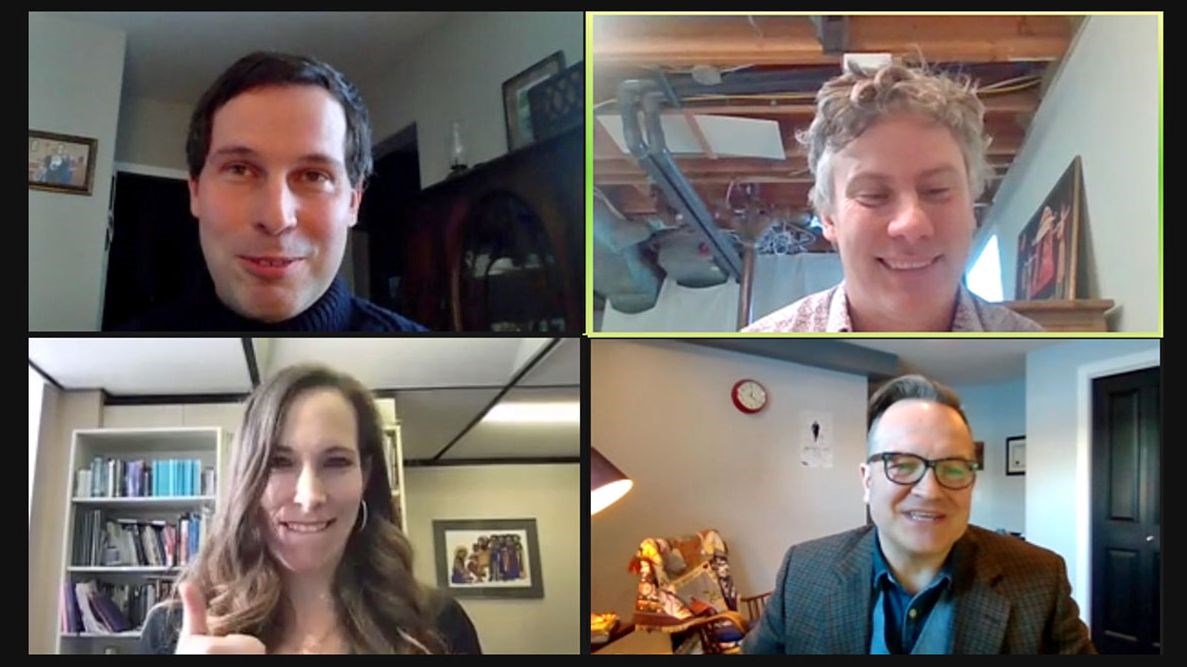 This story first appeared on the Roman Catholic Diocese of Saskatoon’s news site and is republished here with permission.

St. Thomas More College at the University of Saskatchewan held an online event Jan. 28 to unveil the creation of a new academic centre.

The Centre for Faith, Reason, Peace, and Justice is dedicated to fostering excellence in teaching, research, and community outreach in three of St. Thomas More (STM) College’s interdisciplinary and distinctive program areas:

– Catholic Studies, engaging the intersections of faith, reason, and culture in Catholic traditions;

– Critical Perspectives on Social Justice and the Common Good, exploring expressions of justice and solidarity across diverse cultures and contexts; and

– Peace Studies, concerned with the analysis and creative transformation of conflict.

“The centre will truly succeed if it convenes discussions on critical issues that might not otherwise take place,” said STM President Carl Still in opening remarks during the online event.

“At a time when many of us are more comfortable talking only to those who already think the way we do, the centre will practise the art of dialogue, which Pope Francis recommends most strongly.”

The centre will further the ongoing dialogue between the Catholic Church and the wider society, “but also to welcome into that discussion many perspectives, from other Christian communities, from other communities of faith, and from any and all people of good will who are engaged in making our society a more equitable and peaceful place for all its members.”

There is much to “talk about and to learn from one another,” particularly at this challenging time of a world-side pandemic, he noted.

“This centre has been years in the making,” said the president of STM college.

Still described how the establishment of the new centre follows years of discussion that began with the establishment of a minor in Catholic studies at St. Thomas More (the federated Catholic College at the University of Saskatchewan in Saskatoon), and continued as another minor in Social Justice and the Common Good was launched at STM.

Because both of these new minors were multi-disciplinary, they had no obvious departmental home, Still explained. “One way to house them was to create a centre which could oversee these programs, coordinate between them, and provide active community outreach to potential partners,” he said, describing the history that has led to the establishment of the new centre.

“As we launch the new centre today, STM has also proposed a new program in Peace Studies, which again has no parallel at the University of Saskatchewan,” Still said.

The name and the work of the new Centre for Faith, Reason, Peace and Justice therefore focuses on the three interdisciplinary areas of study — Catholic Studies, Social Justice and the Common Good, and Peace Studies, he said.

“The new centre will coordinate instruction in these three programs, and it will foster new inquiry into all kinds of topics associated with faith and reason, peace and justice,” said Still. “In all those ways it will serve the students at St. Thomas More College and the University of Saskatchewan by creating opportunities for study that would not otherwise exist on our campus.”

However, creation of this centre goes beyond that academic benefit, Still stressed.

“This centre is intended to reach beyond the walls of STM and the university campus to engage community partners who share an interest in issues of our time that involve faith, peace and justice,” he said.

“It will amplify the work already made possible by the Leslie and Irene Dubé Chair of Catholic Studies at STM and extend it even further out into our community.”

Reflecting that broader vision, the online launch of the new Centre for Faith, Reason, Peace and Justice included a panel discussion with representatives of Catholic health, Catholic education and the Catholic diocese, moderated by centre Director Dr. Chris Hrynkow.

The three members of the centre’s advisory committee reflected on the vision, potential and hope for the new Centre for Faith, Reason, Peace, and Justice, and how it might benefit their own work and build stronger connections in the wider community.

Efforts to strengthen and articulate Catholic identity in an increasingly diverse world was identified by Sittler as a priority for Catholic Health Care institutions that could be enhanced by the work of the new centre.

“I think that something like the centre gives us the chance to partner to have that conversation, to begin to articulate who we are and what we mean in this modern context,” said Sittler.

As an example, Sittler cited areas that have not traditionally been talked about in terms of health, but which have an impact, such as the environment, justice, reconciliation with First Nations, the common good, equity, immigration, affordable housing, racism and relationships with LGBTQ2 persons.

As advice for the new centre, Sittler said: “you need to be bold … and you need to really offer something challenging and relevant and current.”

Lich said the centre will provide another resource for animating faith discussion and formation for teachers and students in the Catholic school system. “I see a lot of places where our work can intersect in terms of what we are doing together as people of faith,” she said.

Rogal pointed to the potential for greater collaboration and connections with many community partners, as a kind of “clearing house” for justice and peace efforts in the community through a lens of Catholic Social Teaching.

For instance, he pointed to the ongoing partnerships in “hosting events that are engaging and supporting the work of one another as something that I think the centre will really enhance,” said Rogal.

He noted two events that are already scheduled — a three-part online series looking at the Amazon Synod and challenges faced by the people of the Amazon and similar challenges to Indigenous People in Canada (with the next session in the series to be held Feb. 16), and an upcoming online dialogue March 2 about the papal encyclical Fratelli Tutti and just recovery from COVID-19.

During the panel discussion, Rogal challenged the new centre to “deliberately seek out those whom we disagree with,” to identify gaps in the community, and to use the medium of stories to foster dialogue and to hopefully “break down false dichotomies that divide us and paralyze us from accessing the truth.”

Goals identified for the Centre for Faith, Reason, Peace, and Justice include:

– Animating in St. Thomas More College (STM) students a passion for learning and service in the areas of faith and reason along with peace and justice.

– Sponsoring and partnering to deliver engaging conferences, lectures, and panels, which touch upon one or more of the Centre’s key areas.

– Hosting film nights introduced for their relevance to the Centre’s key fields and followed by a short panel and open conversation.

– Celebrating the work and experiences of STM students involved with centre programming.

– Establishing a social media presence to promote the centre’s activities and share information related to the centre’s three fields.

Other participants in the online event were STM Dean Dr. Arul Kumaran, who noted the centre is a continuation of St. Thomas More College’s ongoing mission, both in the areas of academics and outreach, and STM Director of Mission and Ministry Gertrude Rompré who led a commissioning and a prayer of blessing for the new centre to conclude the event.

“May STM’s new Centre for Faith, Reason, Peace, and Justice be a place where faith and reason walk hand-in-hand, a moment when justice deepens our love for each other, and a continuing conversation where swords are transformed into ploughshares,” prayed Rompré

She also prayed that the centre would be an “incubator of hope, a birthplace of understanding, a leaven for reconciliation.”

The Solemnity of Saints Peter, Paul, and the Apostles reminds us that Christ called upon them to be teachers and pastors. St. Peter is the patron saint of St. Peter's School in Unity. #CatholicEdSK

On this solemn feast of Saints Peter and Paul, we ask for their intercession and God's blessings for everyone at École St. Peter School and École St. Paul School. St. Paul is also patron of our school division. Sts. Peter and Paul, pray for us. #SaintOfTheDay

Congratulations to all students graduating today from
@EDFeehanHS and @stjguardians!