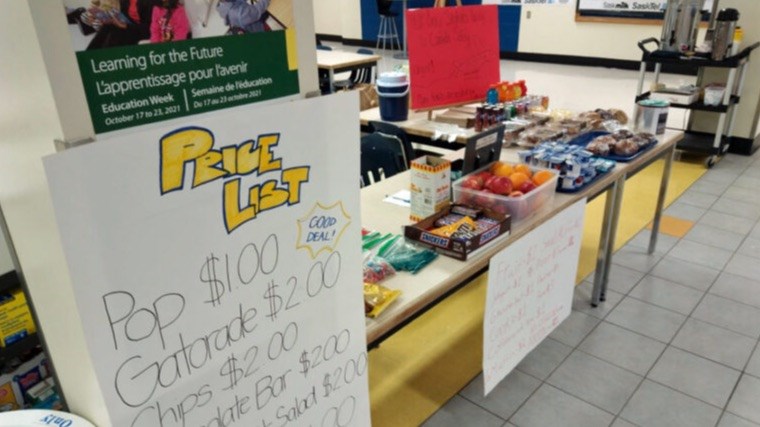 This story was originally published by the Roman Catholic Diocese of Saskatoon and is posted here with permission.
By Kiply Lukan Yaworski, Catholic Saskatoon News

When an E.D. Feehan student spoke to her teachers about the peril facing her brother and his family, they knew they had to do something to help.

A newcomer to Canada, enrolled in the Adult 12 Program at the Saskatoon Catholic high school, the student was terrified and unsure what to do next to try and help her brother, his wife and their two young children, ages 5 and 7, who were on the run, fleeing for their lives to another country after an extremist organization took power in their home country.

The student shared her fears and the family’s desperate plight with her “Feehan family,” who quickly stepped up to help.

After consulting the principal, staff members led by teacher-chaplain Ryan LeBlanc launched an effort to help the family with immediate needs, and to initiate a private sponsorship to bring this imperilled refugee family to Canada.

To raise the funds needed for the sponsorship (a minimum of $30,500 to ensure support for the family for one year), as well as funds for the family’s immediate emergency needs and eventually for the cost of transportation to Canada, the group is seeking help from the community in the form of monetary donations.

A “Go Fund Me” campaign has been set up  and a refugee sponsorship group has been formally established, consisting of a number of E.D. Feehan staff members and the student herself, working through the Roman Catholic Diocese of Saskatoon Office of Migration, a Sponsorship Agreement Holder (SAH) with the federal government. St. Mary Parish in Saskatoon has also been approached to assist in welcoming the newcomers when they arrive.

More immediately, the E.D. Feehan sponsorship group has already sent vital help to assist the family in finding a safer place to stay and helping them to buy food. But the situation is precarious, with the country they are now in actively working to deport refugees back to their home country.

The father of the family had received verbal threats to his life because he was working honestly for the previous government in power, and the mother of the family was targeted for her work with abused women, explains LeBlanc.

The E.D. Feehan school community immediately began raising funds through concession and candy sales, as well as the Go Fund Me page, and was able to quickly send funds to help the family move to a safer location in a larger urban centre, says LeBlanc.

It was risky and difficult for them to find accommodation, with hotels warned that they would be fined and shut down if anyone from the family’s home country was found on the premises.

LeBlanc believes that prayer made the difference. “The whole school was praying for this family’s safety. We put up a statue of St. Jude in the chapel. I asked everyone I could, all the prayer warriors I knew, to pray. And I believe prayers reached around the world and our family found friendship.” One person ended up selling his cows to pay for the family’s transport to the city, and a landlord agreed to rent them a private apartment for the time being – although in doing so, he was putting himself at risk.

“Prayers were able to help to strengthen these helpers and these friends to show a bit of kindness where we couldn’t,” says LeBlanc

“They ended up warm, safe, secure, private, and fed… and they have that space to stay for a limited amount of time.”

Even so, the danger continues, with fear of discovery and deportation back to their home country, where they would almost certainly be executed. As well, “being undocumented in any country means you have no recourse to police or health or education,” Le Blanc points out.

The priority now is to get the needed funds in place and get the family to Canada as privately -sponsored refugees.

In that process, Jan Bigland-Pritchard, coordinator of the diocesan Office of Migration, has been instrumental in providing “really good information and good guidance on the process,” LeBlanc says, noting that the Migration office, parishes and partners have done many private sponsorships over the years.

Although the diocese had used up all its allotted refugee spots for the year, the Office of Migration was able to apply for more spots given the situation. As well, the local E.D. Feehan group has support from their local MP, who has written a letter to the federal Minister of Immigration, Refugees and Citizenship about the case.

“With everything else falling into place, there is a potential to sign the application and get it approved really quickly,” says LeBlanc. That means the remaining variable will be getting the necessary funds in place.

“We are praying for our Christmas miracle, and for this holy family to find their way to safety.”

To donate via the Go Fund Me campaign, go to https://www.gofundme.com/f/refugeeYXE to make a donation.

For those who wish to avoid fees, cheques can be written to the Roman Catholic Diocese of Saskatoon, 123 Nelson Road, Saskatoon, SK S7S 1H1, indicating in the memo “Migration – Feehan.”

(Please note that donations towards the support of an individual family are not eligible for a charitable tax receipt).

For more information about refugee sponsorship, contact the Office of Migration in the Roman Catholic Diocese of Saskatoon: migration@rcdos.ca

Tickets available for purchase at the school at lunch this week, or call 306-659-7900. Tickets will also be sold at the door (subject to availability).

💻 Laptops and technology are utilized on a regular basis to help engage and provide students with an enriched learning experience.

🎁 Your support can provide two students with a new laptop - https://bit.ly/3VPdDmY