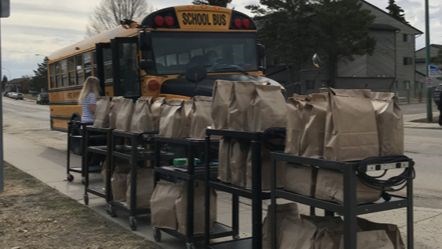 By now you know the story: on March 11 the World Health Organization declared a pandemic, and federal and provincial governments around the globe started implementing aggressive mitigation strategies to prevent the spread of COVID-19.

On March 16, the Government of Saskatchewan announced that classes would be indefinitely suspended starting March 20 (they would later be cancelled for the entire school year), and the phrase “supplemental learning” entered our lexicon. School divisions were given a week to create and implement at-home learning.

There are lots of things that happened behind the scenes that you may be less familiar with.

Right away, Information Technology and Educational Technology teams shifted into overdrive to support an unprecedented shift to online learning. YouTube training videos gave step-by-step instructions for teachers, students and parents. Over 250 teachers volunteered to mentor their colleagues who had limited or no experience with platforms such as Microsoft Teams or Google Classroom. Cyber School, our existing online learning platform, gave another option for teachers.

While online learning plans could work right away for the majority of families to participate in supplemental learning, not everyone had access to a computer and the internet. Approximately 800 laptops and tablets were loaned to families. Thanks in part to a partnership with Saskatoon Teachers’ Association and Saskatoon Public Schools, the division was able to purchase and loan 175 cell phones—with a reduced price on 10 GB per month data plans from SaskTel—to use as internet hotspots.

Physical learning kits were also provided to some families after strict handling protocols and procedures were developed in conjunction with Saskatchewan Health Authority. Also, science kits were provided by the University of Saskatchewan College of Arts and Science Kamskénow program.

Ways to provide support and services typically provided at schools (beyond learning) were created, too. With the suspension of in-person classes, thousands of children who were given meals and snacks at school were suddenly cut off from that support. Nutrition kits for families were developed—again, after safety protocols and procedures were established. Families could pick up the week’s nutrition kit or have them delivered by our busing partners. An estimated 30,000 deliveries that included about 80,000 meals and snacks were supported by partners like Nutrien, Kinsmen Club of Saskatoon, Gabriel Dumont Institute and Greater Saskatoon Catholic Schools Foundation.

Knowing the stress of this rapid, unprecedented change could have adverse reactions from students, a Student Support Line was established to give students the opportunity to speak to a counsellor to seek help and advice—or to just have the chance to talk to a compassionate ear.

Oh, and did we mention the not-so-minor task of re-inventing graduation ceremonies for a safe, virtual platform?

Have a blessed summer, and we’ll see you in the fall!

More detail of pandemic preparedness and plans for over the last few months can be found in board meeting agendas (April May and June meetings).

Cancellations are for the entire day.

All schools are open regular hours

All RCSD provided Transportation is cancelled for today, Wednesday, December 7. Please report absences to the school via Edsby or by calling the office.
Stay safe and warm!