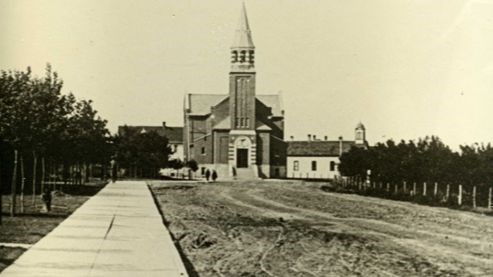 The November 23 Organizational Meeting, the first Board of Education meeting for Greater Saskatoon Catholic Schools’ trustees since the election, had a blend of familiarity and newness—in more ways than one.

The 10-member board has seven returning and three new members after the civic election that took place earlier in November.

The meeting location was not the usual board room in the downtown office. Trustees returned to the place that it all began in 1911—the basement of St. Paul’s Co-Cathedral.

Of course, it was not the co-cathedral 109 years ago. The cathedral (as it was then) was the centre of Catholic faith life for the Roman Catholic Diocese of Saskatoon, and became the first classroom for the newly formed St. Paul’s Roman Catholic Separate School Division # 20—now commonly known as Greater Saskatoon Catholic Schools.

The annual Organizational Meeting is where the board selects a chair, vice-chair and trustees to represent the board on a variety of committees.

“Being able to gather in a larger space, together in one place as a newly elected group of trustees, is really important,” said Diane Boyko, Chair of Greater Saskatoon Catholic Schools’ Board of Education. “Not only is meeting in St. Paul’s a bit nostalgic, I think it helps ground us in our mission of Catholic education—to nurture the spiritual dimension of the person in addition to the intellectual, physical, mental and emotional. I’m hopeful this sets a good direction for us as we start our term as elected officials entrusted to lead the division.”